Constructed near Prague in the 13th century, Houska Castle has housed mad scientists, Nazis, and perhaps even “demons.”

Archaeological evidence has shown that Celtic tribes inhabited the land Houska Castle stands on in antiquity. Slavic tribes migrated to the area that is now Czechia as early as the sixth century C.E. creepyplanetpodcast/Instagram

According to Bohemian chronicler Václav Hájek, the first known structure near Houska Castle was a small wooden fort. It was built in the ninth century, before a crack in the limestone appeared — which locals believed was a gateway to Hell and allowed inhuman entities to enter our world.anulinkaaa/Instagram

The castle is surrounded by the forests 30 miles north of Prague. boudiscz/Instagram

Villagers eventually tried to block the alleged “gateway to Hell” with stones, only to see the seemingly bottomless pit devour whatever they threw in — refusing to be sealed. creepyplanetpodcast/Instagram

Locals were said to fear the endless abyss so much, they believed that they would be turned into the demonic creatures it spawned themselves. Wikimedia Commons

Houska Castle was built during the reign of Ottokar II of Bohemia between 1253 and 1278 as an administrative hub from which the king could manage royal estates.penzion_solidspa/Instagram

The castle was built in an impenetrable forest that provided no hunting opportunities nor strategic position near a border or any trade routes.planet_online/Instagram

In addition to its curious location, Houska Castle was built without stairs leading from its two upper floors to the courtyard. Many of the windows were fake, in that they were made of real windowpanes — but had thick walls blocking them from inside.filip.roznovsky/Instagram

As legend has it, Ottokar II of Bohemia ordered the castle built to seal the gateway with a fortress for good. Upon completion, he offered prisoners facing the gallows a full pardon if they entered the endless abyss and reported on what they saw.lisijdom/Instagram

The first man to do so happily agreed to be lowered down by a rope but cried out to be raised back up within seconds. A young and healthy man upon descending, his hair had turned white when he emerged — with his face having aged decades in mere moments. creepyplanetpodcast/Instagram

The prisoner’s traumatizing descent allegedly saw him driven into an insane asylum, where died within days.
_lucy_mama/Instagram

Ottokar II of Bohemia not only sealed the gateway to Hell with stone plates but ordered a chapel built above it. The chapel was dedicated to the Archangel Michael, who led God’s armies against Lucifer’s fallen angels. Scary Side of Earth/Flickr

While evidence is scant, some say that a Swedish mercenary and practitioner of black magic named Oronto inhabited Houska Castle in the 1600s. He allegedly toiled on experiments to find an elixir for eternal life in his laboratory until terrified villagers assassinated him for blasphemy. Scary Side of Earth/Flickr

Renovations to modernize the castle after the Renaissance began in the 1580s, with various nobles and aristocrats inhabiting the fortress across the ages.terka_cestovatelka/Instagram

By 1700, Houska Castle fell into complete disrepair. It would only be fully restored more than a century later in 1823.tyna2002/Instagram

Josef Šimonek purchased the castle in 1920. The president of Škoda Auto would have to abandon it during World War II, however, when the Nazis invaded and took control of the fortress. anezka.hoskova/Instagram

While Nazi Germany took countless castles and plundered the nations it invaded during the war, the appeal of Houska Castle remains debatable. It lacked defenses, most of which were built facing inward, and didn’t even have stairs. Some believe that an obsession with the occult by high-ranking members was why the Nazis occupied Houska Castle.adriana.rayer/Instagram

Allegedly, SS leader Heinrich Himmler feared his extensive library of occultist manuscripts would be destroyed as the war increasingly threatened Berlin. Some say he had his books secured at Houska Castle and that the Nazis conducted rituals and experiments while they were there to see if they could harness the power of Hell for themselves. _lucy_mama/Instagram

The castle today is littered with unsettling decorations._lucy_mama/Instagram

The castle walls are adorned with numerous fresco paintings that depict St. Christopher, the crucifixion of Jesus Christ, and a half-animal, half-human hybrid hunting a villager.Wikimedia Commons

Locals avoided the area near Houska Castle even when it lay completely abandoned. _lucy_mama/Instagram

This particular fresco has left many scholars in awe, as it depicts a centaur from pagan mythology yet adorns the walls of a Christian chapel. The fact that this beast is using its left hand to shoot its arrow is even more unnerving, as left-handedness was associated with Satan in the Middle Ages.BizarreBazaarEden/Facebook

Houska Castle has been open to the public since 1999.rady.u/Instagram

After World War II, the castle was returned to its rightful owners, the descendants of Škoda’s president Josef Šimonek.adele_blacky/Instagram

While locals claimed to have seen winged creatures fly out of the gateway to Hell in the past, today’s visitors say they’ve observed other entities. These include a half-bullfrog, half-human creature, a headless horse, and an old woman traversing the grounds._lucy_mama/Instagram

A fresco depicting the crucifixion of Jesus Christ.rady.u/Instagram

The gateway to Hell is allegedly so deep that one can’t see the bottom. Excavations or exploration are strictly forbidden, under the pretense that bombs from World War II may still be hidden inside — and might explode if tampered with. _lucy_mama/Instagram

The remains of three Nazi soldiers are said to have been found in the courtyard.lucy.vales/Instagram

A water fountain at Houska Castle was installed during renovations.rady.u/Instagram

The views from atop the castle roof are spectacular.lucy.vales/Instagram

Visitors still claim to hear screams and scratching noises from the chapel at night.lucy.vales/Instagram

Castle Houska has stood for 700 years.tomasliba/Instagram

The Eerie History Of Houska Castle, The Gothic Fortress Built To Seal A ‘Gateway To Hell’

Hidden by thick forestry, Houska Castle in Czechia is shrouded in nightmarish myth and occultist legend. It was built atop a cliff in Prague’s countryside, mysteriously isolated from all trade routes. It had no source of water or fortification. Some say it wasn’t built to keep evil from entering — but to prevent it from spilling out.

According to the castle’s official website, it was built in the 13th century as an administrative hub for the king, but Czech folklore maintains that the true purpose of its construction was to seal a gaping crack in the limestone. Locals believed this was a gateway to Hell from which demonic beings emerged to feed on villagers and drag them back into the abyss, never to be seen again.

Legend has it that prisoners who were facing the gallows were offered full pardons, but only if they agreed to be lowered into the bottomless hole and report on what they saw. The first man to do so was young and healthy, and he happily accepted. Within seconds, however, he cried to be raised up. When he was pulled from the chasm, his hair had turned white.

The castle’s eerie history doesn’t stop there, though. Nazi experiments took place within its walls during World War II. Some say the Wehrmacht occupied this castle precisely to investigate whether the gateway to Hell was real, as feverish occultism had consumed its higher ranks. Today, Houska Castle remains one of the most haunted places on Earth.

The Haunted History Of Houska Castle

While Houska Castle now welcomes countless tourists from around the world, the limestone cliff on which it sits has drawn people in since antiquity. Archaeological evidence shows Celtic tribes inhabited the land far before the Middle Ages, and Slavic tribes migrated to the region in the sixth century.

As Bohemian chronicler Václav Hájek detailed in his Czech Chronicle in 1541, the first known structure at the site was a small wooden fort in the ninth century. Hájek also recounted local folklore that described the emergence of a crack in the cliff. It revealed a seemingly endless abyss that villagers deemed an entrance to Hell.

Locals were terrified of the half-human hybrids that began to crawl out of the hole at night and tear livestock apart. Fearful of turning into these demonic entities themselves, villagers avoided the rocky entrance. They tried to block it with stones, but the abyss allegedly gobbled up anything they dropped into it, refusing to be filled. 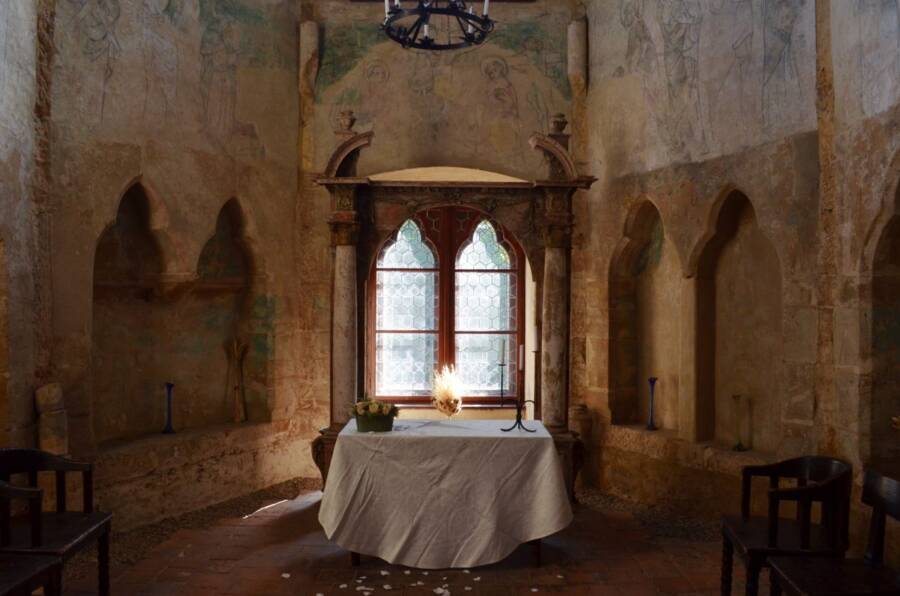 King Ottokar II of Bohemia had the gothic structure built sometime between 1253 and 1278. Oddly, the original construction omitted stairs from the courtyard to the upper floors, and most of the structure’s defenses were built facing inwards. It was as if the purpose of the castle wasn’t to keep invaders out but rather to keep something trapped within.

Perhaps most notable of all, the king had the gateway to Hell sealed with stone plates and had a chapel built above it. The chapel was dedicated to the Archangel Michael who led God’s armies against Lucifer’s fallen angels, leading some to believe the gateway truly existed — or still does.

By 1639, the castle was occupied by a Swedish mercenary named Oronto. The black magic practitioner allegedly toiled nightly in his laboratory in an effort to create an elixir for eternal life. This instilled villagers with so much mortal fear that two local hunters assassinated him. Despite Oronto’s death, locals continued to avoid the area.

The Gateway To Hell In The Modern Day

Scholars have since discovered cracks in Hájek’s histories, and any evidence of Oronto’s existence is rather dubious. Houska Castle did trade hands between various nobles and aristocrats in later centuries, however. It was renovated in the 1580s, fell into disrepair by the 1700s, and was fully restored in 1823. A century later, Josef Šimonek, president of Škoda Auto, purchased the castle for himself.

In the 1940s, the Nazis overtook the castle during their occupation of Czechoslovakia, though their reasons for doing so are unclear, as the castle lacked defenses and was 30 miles from Prague. According to Castles Today, some believe they needed to secure the 13,000-manuscript library of SS leader Heinrich Himmler, who was obsessed with the occult and believed that its power would help the Nazis rule the world.

Himmler allegedly feared his trove of blasphemous materials would be destroyed in the war, but was something even more sinister afoot? Locals at the time reported strange lights and horrifying sounds coming from the castle. Some say that many top Nazi officials, including Himmler, attended dark ceremonies at Houska Castle in which they attempted to harness the power of Hell. 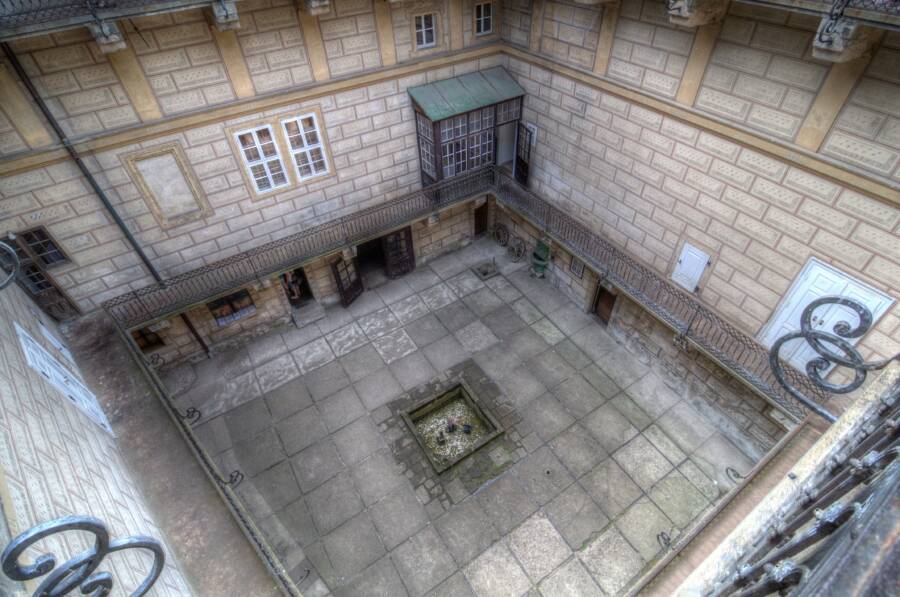 Wikimedia CommonsSkeletal remains of Nazis were purportedly found in the courtyard of Houska Castle.

After the war, the Šimonek family regained ownership of Houska Castle, and they still own it to this day. The castle has been open to the public since 1999. The Prague Daily Monitor reports that many visitors are baffled by its counterintuitive architecture and unnerved by the fresco paintings in the chapel.

The strangest of these paintings depicts a creature with the upper body of a human woman and the lower body of a horse. While it was unheard of at the time to include depictions of pagan mythology in a church, even more staggering is the fact that the centaur is using its left hand to shoot an arrow — as left-handedness was associated with service to Satan in the Middle Ages. Historians believe the painting is a hint to the creatures that lurk beneath the church.

Indeed, to this day, visitors claim to hear screams and scratching noises from beneath the chapel floor.

After learning about Houska Castle, read about Caerlaverock Castle and its 800 years of Scottish history. Then, check out 33 pictures of Spain’s Bellver Castle.